From wowdev
Jump to: navigation, search
This section only applies to versions ≤ 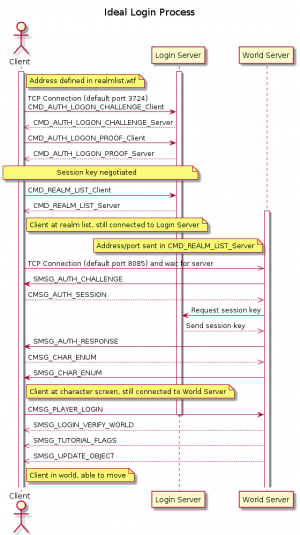 Sequence diagram of the login process. The login server and world server do not have to be separate, but the client expects two separate hosts.

Login can be thought of as three separate steps for the client:

Each step builds upon the previous and it is possible to go backwards in the process.

The client only expects connections to two different servers:

Authentication with the login server happens through a variant of the SRP6 protocol using Login Packets. This allows the client and server to prove to each other that they both know the same password without revealing what the password is to eavesdroppers. The client and server can use this shared secret to create a session key which is used for encrypting the headers of World Packets when connecting to the World Server.

When the client is accepted by the server, it can send reconnect challenges to keep connected with the same session key.

To check the client proof, the server has to SHA1 the concatenation of: the account name, the proof data received, the reconnection challenge and the session key. This hash should match the client proof received to be valid.

It's worth noting that, for build 4125, the client automatically disconnect after a successful login challenge and proof exchange and sends a reconnect packet right away instead of asking for the realm list.

External resources about SRP and how to implement it: 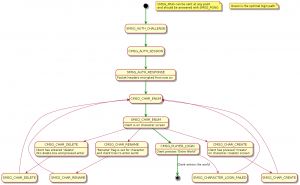 State machine diagram of allowed World Packets before getting to and during the character screen.

When connecting to a realm the client starts a TCP connection to the string specified in the realm list address and then:

The client is now on the character screen and can:

When pressing "Enter World" the client sends a CMSG_PLAYER_LOGIN and the server responds with at least:

And then an SMSG_UPDATE_OBJECT with the player information. The player is now logged into the world and can move around the map.